In 2001 the British group that had attended the Repentance Conference in Jerusalem visited the 'Illegal Immigrant' Detention Camp at Atlit, near Haifa in Israel. This was an internment camp built by the British to hold Jewish people trying to reach the shores of Palestine who did not have the necessary permit. Britain severely restricted Jewish immigration in the 1930s and 1940s and there were many Jews trying to flee from Europe and return to their homeland. Many were interned in Atlit, or sent to a similar camp on Mauritius. Of all the places we visited in 2001, Atlit had the greatest impact upon us. Most of us were totally unaware of what the British authorities had done during the Mandate to deter the Jews from coming home.
(Photo, restored barrack huts at Atlit detention camp)

We decided that we wanted to express our sorrow for these acts by putting up a plaque at the Camp. On 3rd November 2005 we held a ceremony in the Rabin Hall at Atlit, one of the reconstructed barrack blocks at the Camp, expressing our sorrow. The plaque was unveiled by Olga Marshall, and Hugh Kitson, producer of the film "The Forsaken Promise" which details Britain's history in Palestine before Israel gained her independence.

The words are in English and Hebrew, and read: "In sorrow and shame, we recognise the complete betrayal of the British Mandate for Palestine as represented by the Atlit Illegal Immigrant Detention Camp. 'Father, forgive us, we pray.'"

As a symbol of our ongoing relationship with the Atlit Camp we also planted an olive tree near the spot where a memorial was to be erected honouring those Jewish people who lost their lives trying to reach the Promised Land. Over 2,500 people perished, many lost at sea, some killed by the British navy or army, and some who died of natural causes on their way to Mandatory Palestine. The olive tree is especially relevant as Romans 11:17-18 refers to the olive tree as a symbol of the Jewish people, and the Gentiles being grafted in as 'wild olives': "If some of the branches have been broken off, and you, though a wild olive shoot, have been grafted in among the others and now share in the nourishing sap from the olive root, do not consider yourself to be superior to those other branches. If you do, consider this: you do not support the root, but the root supports you." The memorial was unveiled on 27th April 2006, and is the focus now for many commemorative events at Atlit.
(photo, planting a memorial olive tree at Atlit camp) 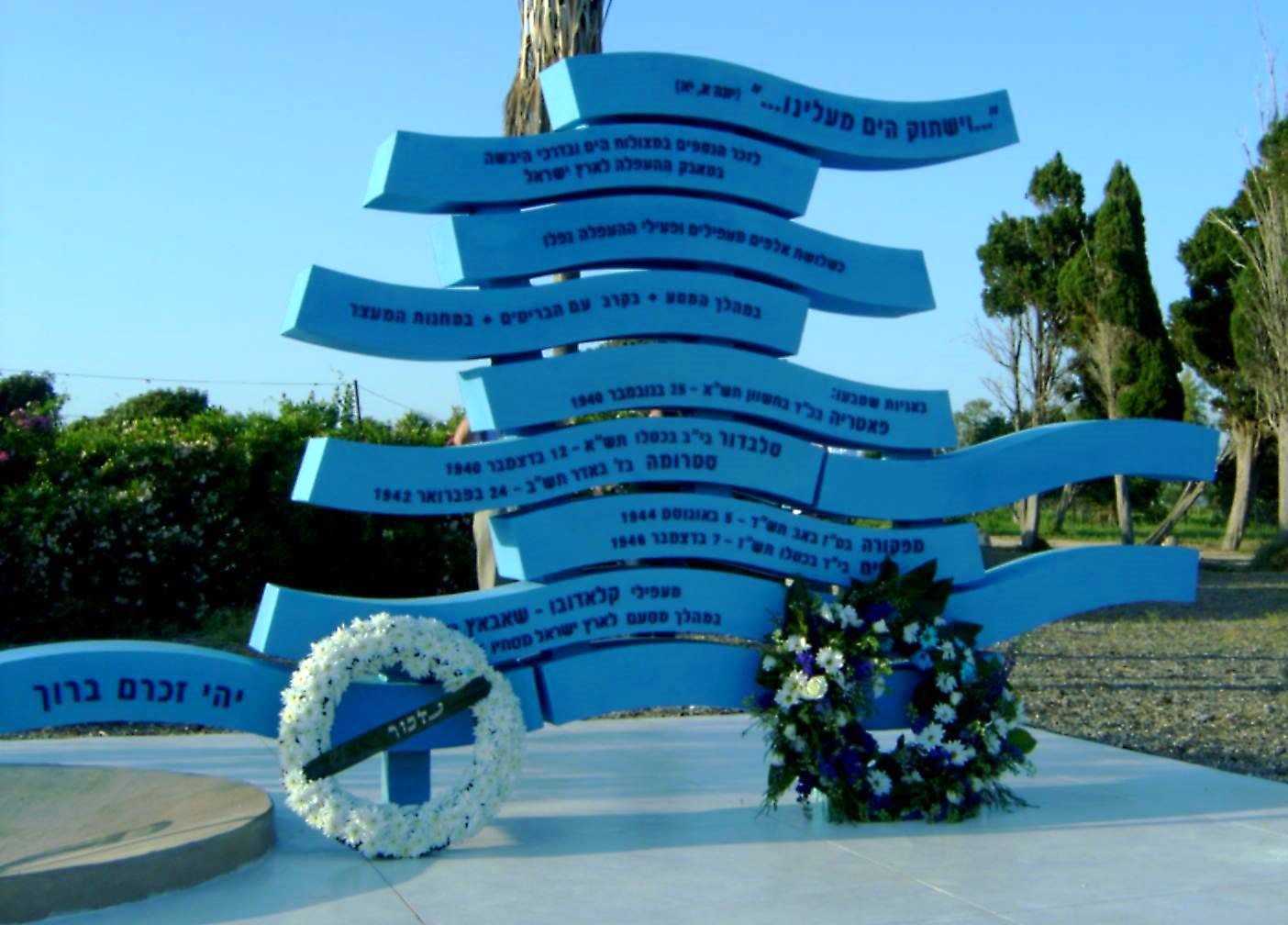 The newly erected and commissioned Christian memorial to those who died attempting to reach Eretz Israel during the British Mandate period (April 2006).