In October 1997 Sister Pista, of the Evangelical Sisters of Mary, spoke at the Christian Feast of Tabernacles organised by the International Christian Embassy, Jerusalem. She called for repentance from the Church for its 2,000 year history of antisemitism. This call was picked up by the Trustees of Christian Friends of Israel, who decided that something should be done in the UK. In June 1998 representatives from several pro-Israel and prayer ministries came together in London to see what could be done. They agreed to form an alliance of ministries, to be called "Love Never Fails" (LNF). Their goal was to implement the repentance initiative advocated by Sister Pista within the UK.

Initially there was much research to be done, as well as explaining why this initiative was necessary. During 1999 services were arranged in various parts of the UK where acts of repentance took place. This culminated on 1st November 1999 (709 years exactly since the Jews were expelled from Britain). On that day we held a National Service of Repentance in the Moses Room of the House of Lords, under the chairmanship of the Earl of Powys. Representatives of the Jewish community were there to witness this historic event. At the service a Solemn Declaration (text below) was presented to Her Majesty's Deputy Lieutenant for Greater London, who promised to take it to the Queen. It contained the signatures of over 3,000 people from around the UK.

Internationally, the call to repentance begun in 1997 culminated in April 2001. The Evangelical Sisters of Mary organised a conference in Jerusalem around the time of Yom HaSho'ah - Holocaust Memorial Day in Israel. Again, this was attended by leading Jewish people, as well as around 700 Christians from around the world.

Following the conference itself the British delegates went on a tour of sites in Israel associated with acts of British antisemitism and places where reconciliation is being worked out. One of the places we visited was the former "illegal immigrants' " detention camp at Atlit run by the British administration to prevent Jews from reaching their ancient biblical homeland during the British Mandate period. 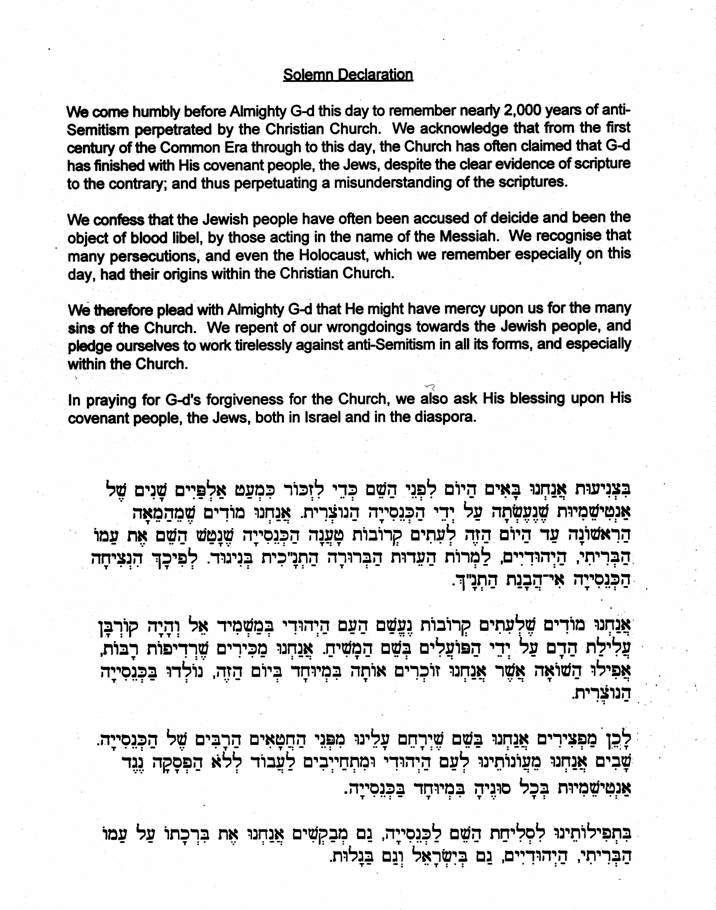