We are a group formed by British Christians who recognise that Britain was called to help birth the restoration of a homeland for the Jewish people. The name "Repairing the Breach" came to Rosie Ross the founder, whilst on a plane flying between Israel and the UK.

"You shall raise up the foundations of many generations: And you shall be called the Repairer of the Breach" (Isaiah 58:12) 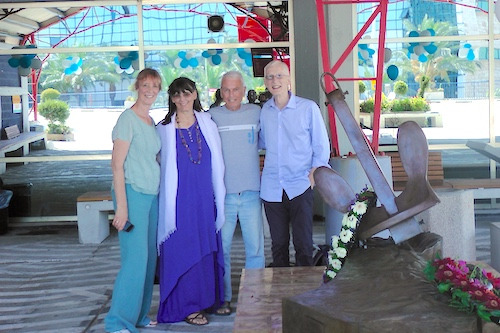 Gidon Ramati with Sally and Francis Prittie and Tamar Taylor at the "Exodus 1947" memorial event in Haifa.

Those from the UK who themselves, or who had family members who were involved in the Mandate, play an important role.

THE CONTEXT FOR REPAIRING THE BREACH
Revivals in the UK from the time of the Puritans to the Welsh Revival caused many to study the Bible and see how Israel and the Jewish people were key in God's purposes. William Wilberforce and Lord Shaftsbury were two prominent leaders who shared God's passion for the Jewish people's salvation and their return to their land.

In 1917 the Balfour Declaration reflected the desire that many British Christians had to see Bible prophecy fulfilled regarding the restoration of the Jewish people to their ancient homeland. This declaration was incorporated into international law in the San Remo Treaty (1920) and the League of Nations Mandate for Palestine (1922). To understand the significance of the San Remo treaty please watch this excellent short explanation (left) or watch the excellent programme filmed in Jerusalem and featuring key Israeli leaders and diplomats. www.ec4i.org.

A "breach" was caused when Britain reneged on her obligations under the Mandate. Britain appeased the Arab cause and greatly limited aliyah in a time when the Jewish people needed it the most i.e. whilst escaping the Holocaust in Europe and after World War 2 when they needed to find a home. If the gates of aliyah* had been fully open hundreds of thousands would have escaped Hitler's Final Solution. Below is an example of "repairing the breach" at Haifa docks and Atlit detention camp. (*aliyah = the return of the Jewish people to their land)

Shaya Charsit is a survivor of the Exodus 1947 ship. We are hoping to bring him to UK from Israel to share his story. Let us know if you would like him to come to your church or school to share with you. Hear Shaya share his moving story in a Zoom link.

"...you have left your first love. Therefore, remember the height from which you have fallen and repent and do the deeds you did at first." (Revelation 2:4-5)

REMEMBERING, REPENTANCE AND THE RECONCILIATION IT BRINGS
Over the last 5 years, continuing LNF's pioneer work, we have been involved with: 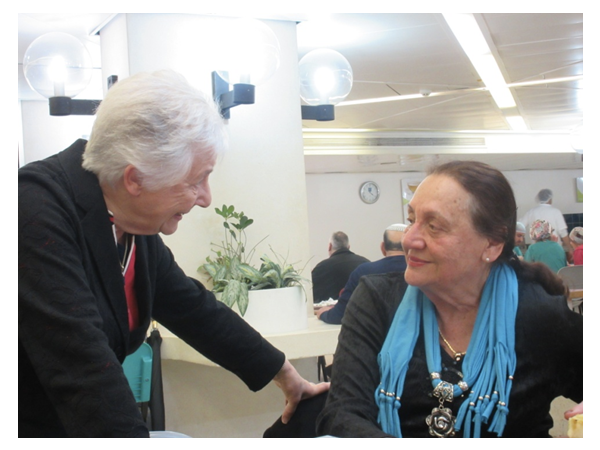 In 2015 we held a significant event at Haifa Port and at Atlit former Detention Camp, to express our sorrow for preventing more than 90 ships, carrying tens of thousands of Jews fleeing Europe, from docking. Britain turned them back to Europe or interned these Holocaust survivors in Detention Camps in Atlit, Cyprus and Mauritius. The Marquess of Reading and Colonel Richard Kemp were two of the speakers at the event. 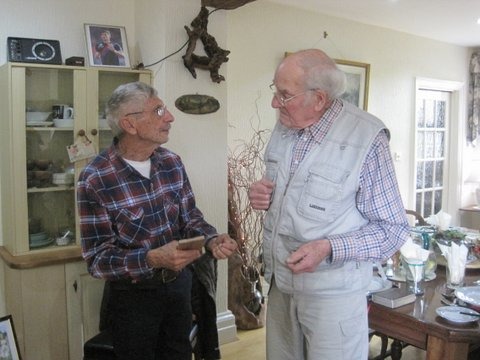 In the summer of 2016 we organised a tour to England and Wales for our Israeli friends. They enjoyed hospitality in British Christian homes, toured various places of interest and spoke at several venues, telling stories of their experiences and sufferings under the British administration.

Many British hearts were touched by their suffering and for many this was the first opportunity to learn about this sad period of British history as it is not widely known by the British public. A special moment was when Arye Itamar met with a former Royal Navy man, Tom Dale, whose ship HMS Chequers was one of the ships that seized control of the famous Exodus 1947 ship.

Our friendship with Arie continues. He wrote in April 2020. "It was on 7.5.15, at the Haifa Port ceremony, that I first met the noble people of RTB. Their message of expressing their deep remorse over their nation's failure during the Mandate years and their desire to see a change in the relationship between our nations attracted me strongly and I started to feel a part of and a member of that family. Their attempt to repair our mutual relationship, as well as fighting against antisemitism and for Israel, is a holy mission. As their friends, we, the Israelis, are obliged to give RTB people, our friendship and support."

"Also the sons of those who afflicted you will come bowing down to you."
(Isaiah 60:14)

In 2017, "Repairing the Breach" was invited to participate in two official Israeli commemorations of the refugee ship, EXODUS 1947 and the more than 4,500 refugee passengers - survivors of the Holocaust. Verity Steele, a musician based in Hampshire, U.K. had learned a little British Mandate history for the first time whilst working in an Israeli orchestra in the 1980s. 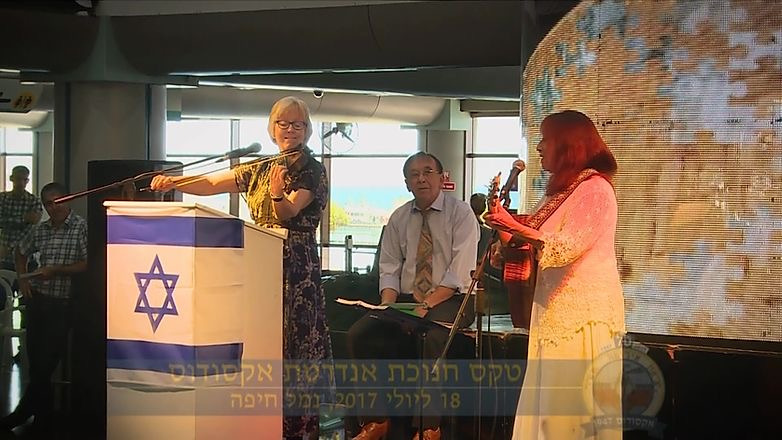 However, the shocking and traumatic nature of the EXODUS affair took on a far more personal tone when she discovered that her uncle had served on a British Naval Destroyer - one of the ships that intercepted the EXODUS in July 1947, resulting in the repatriation of its human cargo back to Germany, of all places! When she was invited to accompany the renowned Israeli singer, Shuli Natan, performing Yerushalayim Shel Zahav at the first of these ceremonies (July 2017), Verity was able to express her personal sorrow over the sufferings caused to the Jewish people by the cruel and shameful British policies of the time.

We, the RTB group as a whole, had the privilege of meeting survivors and spent time listening to their stories well into the afternoon. At the second event (Sept. 2017), which had been organised by survivors and many of their sons and daughters, we, and a specially organised tour group from the U.K. were able to hand out cards expressing our sorrow. Many hearts were deeply touched as the expressions of our heart brought reconciliation. One Holocaust survivor, Rivka, wrote of her experience that day, saying, "Here I like to tell you dear Jan (Cooper), and all the team that I met, I did not expect that today there are people like you with sea change. That gives me optimism for a better future world?" 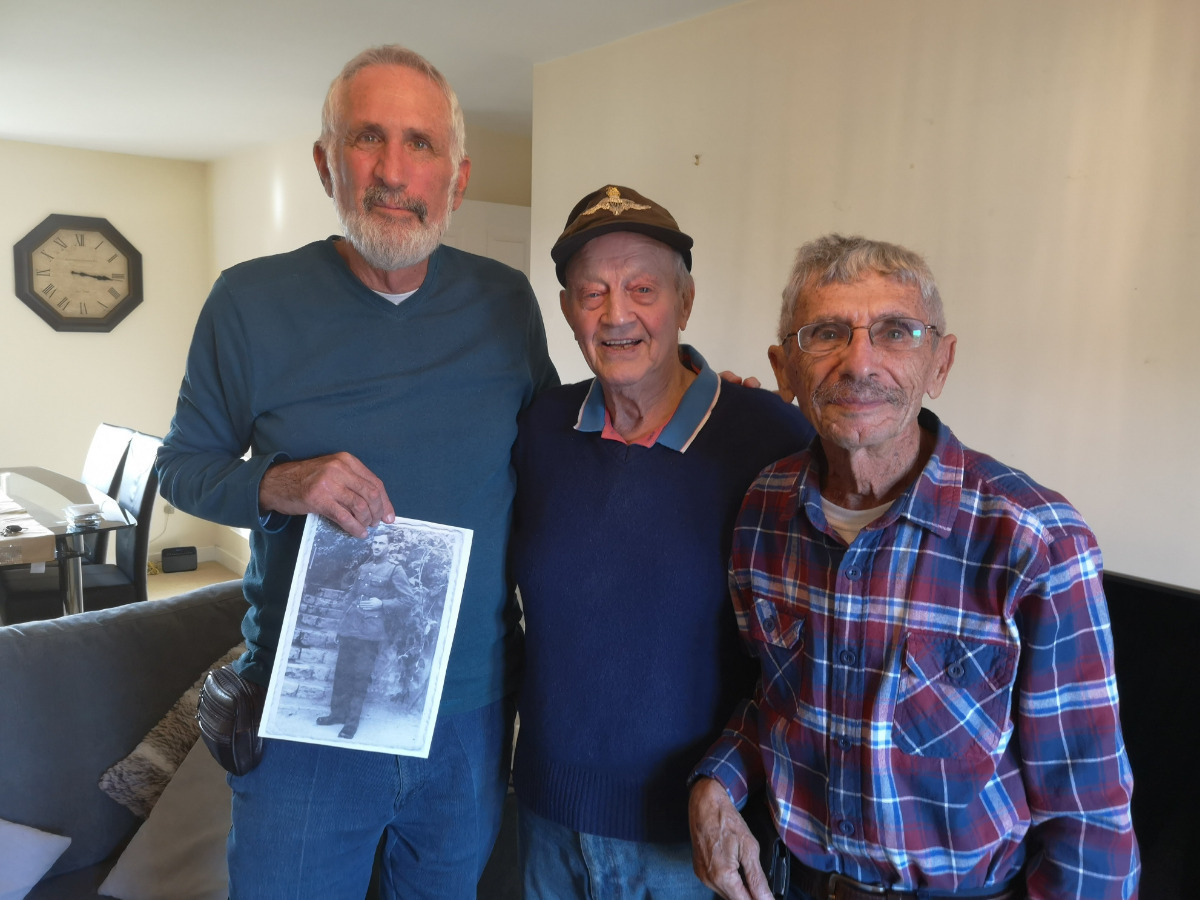 In September 2018 two Israelis came on tour in the UK to tell their stories at six locations from Wales to Westminster. Yaakov Waiman, whose mother Olga was in Auschwitz and then on the Exodus ship, said, "I came as a guest and left as part of a lovely family." He and Arie Itamar met Billy Cooper, a former serviceman who served in Palestine under the Mandate and they listened to each other's stories and had a special time of reconciliation. In Israel on Remembrance Sunday November 2018, Yaakov and Arie laid flowers on the graves of Billy's friends to honour their memory.

In September 2019 Rosie Ross and Jan Cooper joined an Israel Heritage tour to Hamburg organised by the Exodus 1947 families. They had the privilege alongside German Christians, students, teachers and civic dignitaries to be part of ceremonies where the families were welcomed and honoured. 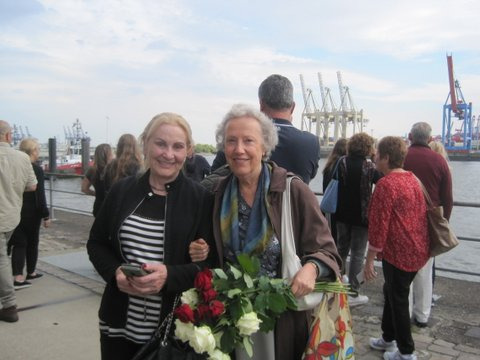 Ester Rubinstein aged 12 on the Exodus said, "You are so humble to come from the UK to be with us, to listen and be at our side." At the British former D.P. Camp, now a German naval base in Sengwarden, the German naval officers received all our group in their canteen. Being served hot soup meant so much. Zeev Aarnon said, "When the war was on, the German army denied me food ...now the German soldiers in uniform are serving me. This was an unforgettable moment. A closing of a circle."

The story of the Exodus 1947 has been captured in this musical prepared by March of Life in Germany with whom we have a growing relationship. If you are interested in hosting this musical, do let us know.

We are deeply grateful to all who share the vision for "repairing the breach" and above all we want to give glory to the God who made heaven and earth through his Son Jesus Christ/Yeshuah Ha Maschiach, our Lord.

Without Him none of this would have come to be.

"For I will restore you to health and I will heal you of your wounds", says the Lord. (Jeremiah 30:17)

You can watch here a shortened version of Hugh Kitson and Hatikvah Films' excellent portrayal of Britain and the Mandate, "The Forsaken Promise"

The full version can be purchased from Hatikvah Films
These links about the Mandate betrayal are from the more recent documentary "Whose Land?" by Hugh Kitson and Title Deeds media: Episode 8
Episode 9
Episode 10
Another excellent resource is the Hatikvah Films' production "The Destiny of Britain"

"Repairing The Breach" is a member ministry of "Love Never Fails", a coalition of UK-based Christian Israel-related organisations.